Which Tourists Often Visit to Borobudur 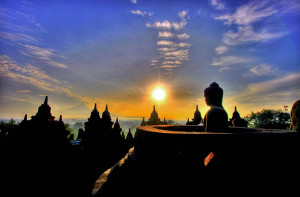 DREAMERSRADIO.COM – Borobudur Temple has become one of the attractions of Indonesia’s most iconic because this place in the list of UNESCO World Heritage Sites . No wonder that many foreign tourists who flocked to the Buddhist temple . Which roughly most tourists visited Borobudur temple ?

According to Director of PT Taman Wisata Candi Borobudur , Prambanan , and Ratu Boko , Purnomo Siswoprasetjo , most tourists come to Borobudur temple are from European countries , such as Holland , Germany , England , and France . In addition , Japanese tourists and Malaysia also includes frequently come to Candi Borobudur .

” They come to see Borobudur World Heritage . They want to know how the history of the temple, who built it and what it means to manufacture , “said Purnomo .

Borobudur temple entrance ticket for foreign tourists priced at Rp190 thousand . Expensive ? By paying Rp190 thousand , the tourists will be guided by a guide from the Tourism Association of Indonesia to know the facts and history of the temple is located in Magelang , Central Java .

” We have 70 guides from the tour guide Indonesia . They mastered many a foreign language , such as English , Dutch , or French . So the tourist information obtained was incomplete and they do not lose pay expensive entry ticket , “said Purnomo .

Borobudur Temple was built during the Sailendra dynasty in the 8th century . This temple is the largest Buddhist temple in the world .

Publish on October 10th, 2013 under Maheswara News by maheswaratourtravel | No Comments »